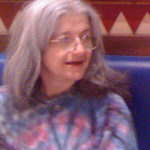 Columbia, S.C. – The Board of Directors of Cherry Hill Seminary has approved the naming of its online library, the Judy Harrow Library & Information Center. Harrow, recently retired as Chair of the Pastoral Care and Counseling Department, has served the Seminary as faculty since 2000, and for the past year as a board member.

The first Wiccan to be legally registered as clergy in New York City in 1985, after a five-year effort requiring the assistance of New York Civil Liberties Union, Harrow has a long record of public service, including:

A Wiccan priestess since 1977, Harrow founded Proteus Coven in 1981, and held several leadership offices for Covenant of the Goddess, on both national and regional levels, including National First Officer in 1984. She founded the Pagan Pastoral Counseling Network in 1982, and served as the first editor of the Network’s publication. Harrow co-created a successful workshop series, “Basic Counseling Skills for Coven Leaders,” which grew into a series of intensive workshops for Pagan elders on a range of topics. She also founded the New York Area Coven Leaders’ Peer Support Group, and served as Program Coordinator for the first Mid-Atlantic Pan-Pagan Conference and Festival, as well as several other Pagan gatherings.

“I’m surprised, thrilled, and honored by this recognition,” says Ms. Harrow. “I’m also excited by the continuing growth and development of Cherry Hill Seminary, which is a real sign of the maturation of contemporary Paganism. So much has changed for Pagans during the many years of my involvement. I am so proud to have been a small part of it.”

Currently, Cherry Hill Seminary is working towards future accreditation, in part because of Harrow’s work as a liaison to Pagans in the U.S. military, which requires its chaplains to hold a Master of Divinity degree from an accredited institution.

“Since the Seminary is primarily a distance education program, the Judy Harrow Library & Information Center will be an online library,” said Caroline Dechert, Seminary Librarian. “When opened, we will be able to meet the specific information requests of professors for their courses and students, and serve as a repository for faculty and student work. This approach will greatly complement our current relationship with the New Alexandrian Library, a project of the Assembly of the Sacred Wheel.”

Harrow is the author of two books, Wicca Covens (1999), Spiritual Mentoring, (2002), and edited and contributed to Devoted to You: Honoring Deity in Wiccan Practice, (2004). She has contributed to Modern Rites of Passage (1993), Magical Religion and Modern Witchcraft, (1996). Her articles have been published in journals such as AHP Perspective (the newsletter of the Association for Humanistic Psychology), Counseling and Values (the Journal of the Association for Spiritual, Ethical and Religious Values in Counseling), Gnosis, and PanGaia.

Cherry Hill Seminary is a 501(c)3 organization, offering graduate education for Pagan ministry and scholarship, as well as adult education and training in Pagan ministry. Contributions to the general fund, in honor of Judy Harrow, may be sent to Cherry Hill Seminary, P.O. Box 5405, Columbia, SC 29250-5405, or online at https://www.justgive.org/nonprofits/donate.jsp?ein=20-4542690.