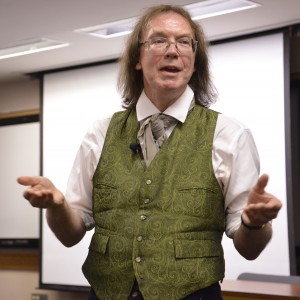 Why is the history of witchcraft or any kind of paganism important to contemporary practitioners?

For two reasons. The first is that modern witchcraft and pagansim were based on claims about the past, specifically with regards to the survival of a tradition. The second, because they both represent the revival of an ancient tradition or traditions, they must look to ancient ideas and images for at least part of their inspiration.

Will you say more about this statement from your 2010 article for The Pomegranate?
“Religions have, of course, very commonly divided into sects over the interpretation of texts, but the latter are normally the sacred writings of the religious tradition concerned. Modern Paganism lacks such scriptures, and instead different publications on the historic past are coming to fill their space.”

It really is very unusual and a little unnerving to find books by professional historians treated with the same interest by practitioners of a religion as is normally given to the alleged words of deities or of prophets. It is also very flattering; but we perhaps need to place less stress on the past and more on virtues of religion as people actually live it.

In the same article you state that you had hoped Triumph readers, especially practitioners outside the academy, would delve into the sources you had cited, e.g., 19th- and 20th-century writers like Forrest Reid. How might rising scholars and independent scholars contribute in a meaningful way to this stream of research?

There is a quite wonderful mine of material for modern Pagans in the literature of the past 200 years. It includes writers, some very well known, and some not, who both had an intensely affectionate relationship with ancient paganism themselves and directly helped to inspire modern Paganism. These works are in publication and in English and so very accessible to English-speaking readers outside of the academy. They provide both wonderful poetry and prose for use in ritual and in one’s own sense of religion, and also a sense of direct kinship with ancestors who can beyond doubt be claimed as part of the history of modern Paganism.

You spoke of the need for society to “let us do our work,” e.g., preventing politics or the trends of academia to overrule actual research. What is lost when this happens, or what has been lost when this has occurred in your career?

The healthiest situation for both the producers and the consumers of research is one in which all parties recognize that the past can often be interpreted in different ways; and that a range of different interpretations is a healthy situation, especially in a modern society made up of individuals, rather than a regrettable situation. In my address, I drew attention to the example of the bog body called Lindow Man, in the British Museum, which had been interpreted as proof of the existence of human sacrifice in ancient Britain. I played a significant part, myself, in a discussion which succeeded in achieving a recognition that the interpretation of human sacrifice was only one of a number that could be applied to the body.

Will you explain for our readers why you said, “We are the only society that both believes in witchcraft and doesn’t believe in it, and I’d like to keep it that way.”

My actual statement was, We are the only society in history which has both believed strongly in witchcraft, and spontaneously ceased to believe in it. I would like it to continue officially to disbelieve in witchcraft, because people who call themselves witches can only really be safe in a society which doesn’t believe in them. By this I am not suggesting that modern witches should stay in the broom closet. What I am suggesting is that they will have a far easier time out of the closet if they define what they are doing as a religion rather than trying to convince people that they possess actual magical powers.

You have shown an extraordinary sensitivity to the reactivity to your work of contemporary Pagans. Cherry Hill Seminary – as a seminary – is in a unique position of educating people who then may function as bridges between the academy and the average Pagan. What advice would you give those who study your work and then disseminate, really sort of pre-digest it, for the non-academic Pagan?

I would advise Pagans to become less worried about history altogether and more concerned with achieving living relationships with their deities and providing wonderful experiences in ritual for their fellow humans.